As I’ve touched on through the course of my recent bloggeral, there are few things more ridiculously corrosive to the creative spirit than a Seattle winter. It’s a time of year for recoiling inward, spelled out by an occasional “death would be pretty favorable to this good shit”-class of migraine and the annual rusting of my joints, wherein every injury I’ve stacked up over years of athletics and working for UPS announce, quite proudly, that they’ll be staying over until mid-May.

The cold and the lack of light also put a cramp in your brain, as well as the logistics of all those artisan-related routines that you take for granted: something as simple as figuring out how to apply a generous slop-dollop of e6000 without giving yourself leukemia (Seriously: have you ever SEEN the label on this thing?! How is it even legal to sell in this country? I have a feeling that yellow cake uranium would register with less alarming rhetoric on the “hazmat warning” scale than this crud…) or finding a spot that can be used to dry out primer without asphyxiating everybody in our complex suddenly provides the basis for enough folly to fill an entire afternoon.

Case in point: the foolhardy foray into polymer clay that I outlined in my last blog entry. For those with weary thumbs and short attention spans, the fruits of said labor were a townhome that wound up reeking like a disaster at the local Dupont factory and the following: 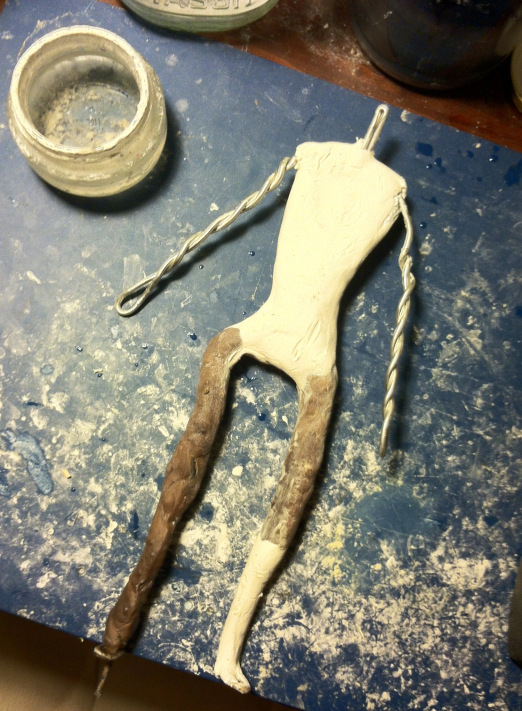 Of course, my compulsive refusal to waste materials wouldn’t simply let things lay in state, though I had a hell of a time figuring out what I was going to do with a half-burned armature that could barely stand up on its own two feet.

I mean, I am—above all things relating to love, life, and the pursuit of happiness—a proud and furious member of the nerd culture. And after the Sculpey fumes cleared and my eyesight returned, the answer really sort of wrapped itself up neatly in a two-toned bow, and there was only one damn thing to do with the result: 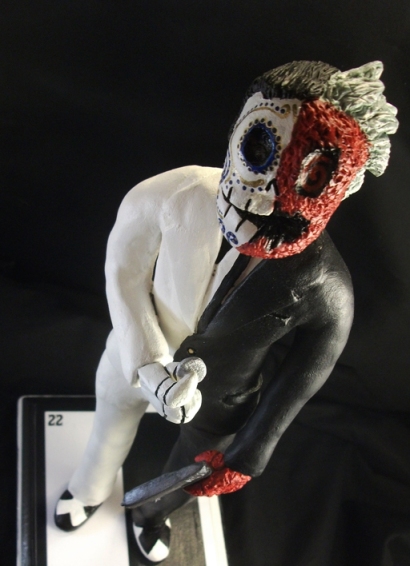 I’ve been saving a long-germinating editorial on the problem with relying too heavily on pop-themed sculpts for a rainy day, but the basic crib-notes version is as follows: they’re something that people absolutely love, which gains web hits and DeviantArt adulation and Etsy “Circles,” but which hardly ever sell. I love making them for the fun of it, but do so while fighting with this notion about it being a cheap “gimme” in terms of actually furthering the state of the muerte arts: the appeal isn’t based on the quality of the work or its authenticity in regards to calavera culture, but rather on the “HEY, I COMBINED THIS STUFF WITH SOMETHING THAT YOU ALREADY LIKE!” snakeoil method. 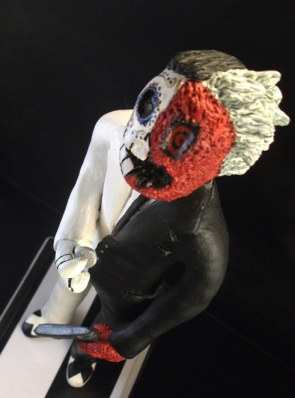 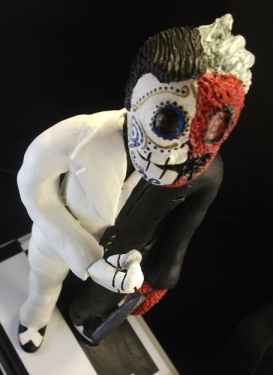 But I also can’t help myself. I know what I like, and—at times as dreary and lifeless as December in the Steel Sky City—I have to indulge myself accordingly, and with the balls-smacked-firmly-and-flatly-to-the-wall detail and adoration that the subject matter merits. I don’t know if this one’s going to wind up being sold or is destined to join Kazuo Kiriyama and Scott Pilgrim on the shelf I’ve reserved for my “much-loved and impossible to even freakin’ GIVE away” works, but… it’s nice to feel that warm grace of inspiration, even during the shortest and darkest days of the year. 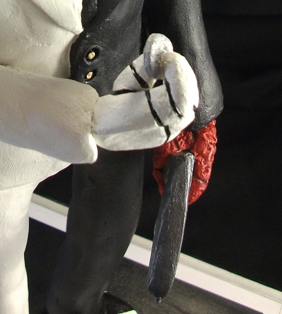 The law? Here’s the only law, the law of averages. The great equalizer.

Even if that feeling is technically on layaway, at the moment.

If there’s one lesson that I’ve really taken to the chin in the last two years, it’s that the actual process of creation is only one minor, finite aspect of the whole artistic identity. That isn’t to imply deep and profound realizations on the soul of expression or even some sense of newly-minted creative confidence, but—in giving myself at least a spoonful of credit—I have to say that I’ve become more at peace with the ups and downs that this craft brings with it in recent months than I have… hell, maybe ever. A lot of that has to do with being blessed by great support from the usual suspects, but a lot of it also has to do with the ongoing process of making these things for loved ones.

There’s a decided similarity between struggling towards consistent, artistic credibility and having your creative Id repeatedly donkey-punched, as I’ve found. One month, you can’t do anything wrong: you make the right pieces, you sell the lights out, and you make those deeply-rooted connections with your local community that only a really resonant art show can bring.

Then, two weeks later, you find yourself with cluttered shelves and a serious case of doubt in not only your abilities, but also your judgment. You glare warily at the crap you’ve put together, and wonder what the hell compelled you to believe that anybody in their right mind would ever cough up a nickel for something like that. You hem and haw and swear that you’re done with trying to impress your imaginary constituency (Much like Homer Simpson shaking his fist at “the people who don’t live there!”), and then—like clockwork—you trip over your principles and find yourself furiously winding the whole thing up again, slashing up clay and twisting wires at 3AM on some Tuesday morning.

But it’s those bounce-back times that always wind up being a good excuse to knock out a personal piece. The unsolicited, unexpected expression of appreciation for a friend or family member; that shot in the eyeballs that one needs to get out of the muck, and back onto the ol’ bone-horse.

In the case of today’s throwback—from about a year ago—the means really did dress the ends nicely. Exhausted from work, finding absolutely no joy in the usual creative outlets, I wound up finally cashing in on that one calaca that I’d been saving for a rainy day: the inevitable diorama that I’d been promising my sister for months. 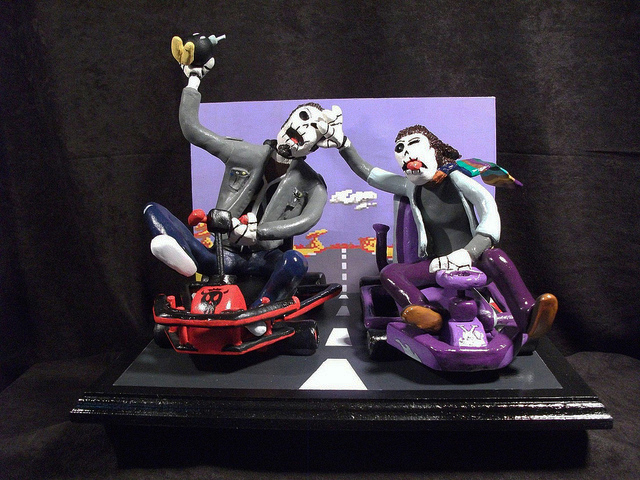 … gloriously goofy as it may be.

As probably goes without saying, this piece went from being a relatively manageable calaca-built-for-one to the monster wall-hanging seen here. The base is about 10”x7” with a custom (and badly) scrolled piece of pine serving as the backdrop; additional to that was the insidiously detailed assembly required for each “kart.” As you can likely guess, each piece was inspired by those long and forever-lost hours of hitting each other with SNES controllers while playing endless Mario Kart tourneys among friends. 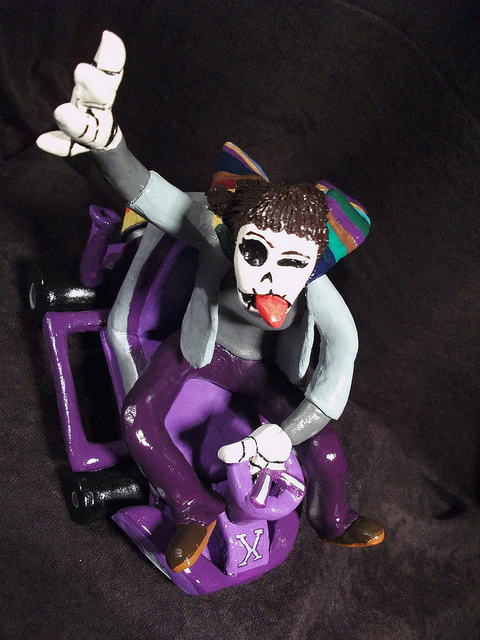 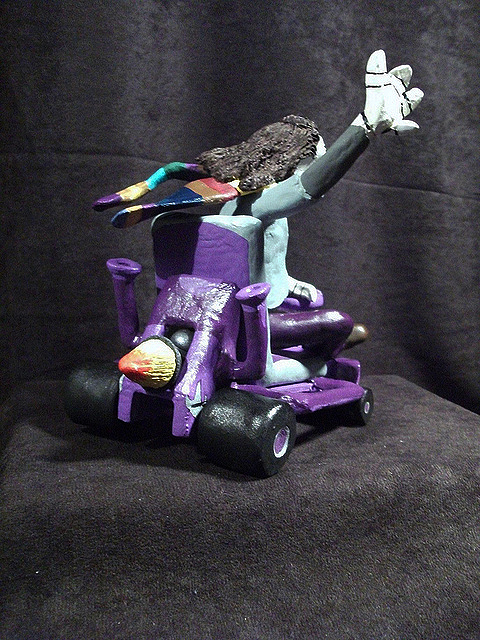 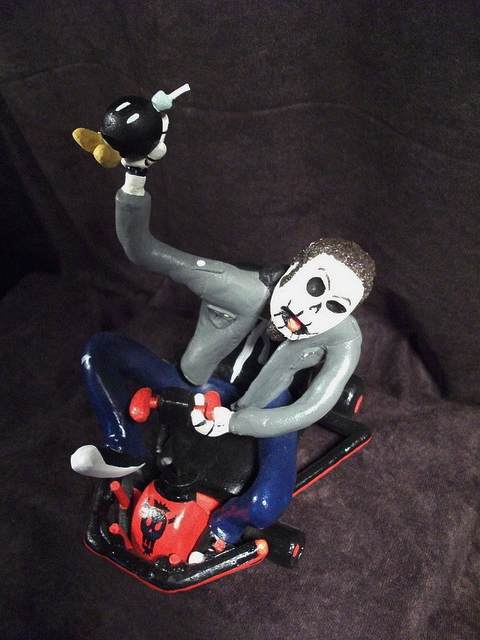 It should also confirm that despite that being twenty years ago, my sister and I are apparently the same self-referential, ridiculous knobs that we’ve always been. For a relationship that’s defined the better part of my life, nothing short of total excess would do, and—looking back—the resulting creative high that came with actually succeeding at building this thing was enough to fuel my absurdist pursuits for another full year. Even divided by miles and decades, making somebody you care about happy is one of the most potent weapons at a person’s disposal… whether it’s the art of expression, or just the ol’ art of being alive and kicking. 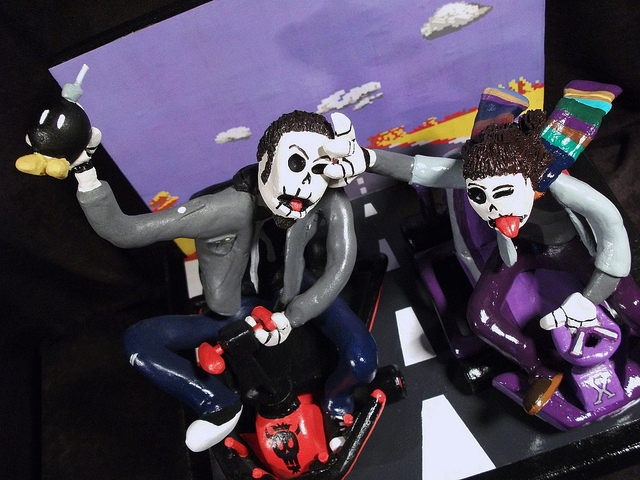 If you gotta say it, say it with a mush-slap and a Bob-omb.

You come across an interesting development, as you get older; the artistic heroes that you held so dear in your chrysaline stages of youth age right along with you, and the results aren’t always pretty. Ask any wayward love-child of the nihilistic media backwash of the mid-nineties how the latest Kevin Smith film was, and you’ll likely get a faceful of insta-heat comments about the myriad ways in which the poor bastard has gone from the defining auteur of his era to an irrelevant, balding bop-’em bag.

Short version of the above statement: it gets tougher and tougher to find artists worth believing in, as the years churn on. Which isn’t to strike some gauche’ pose about how all the greatest songs were written before 2003, or how there hasn’t been a decent novel on store shelves since Pahalniuk lost his stroke… creative and commercial appeal are ultimately arbitrary concepts. Intimate at their best, obstinate when they aren’t. We’re often left at a loggerheads between our gossamer, gold-jacketed memories of dream-state experiences that we had while staying up all night playing Mario Kart twenty years ago and the realization that nothing is ever going to make us feel that way, again. Or so we tell ourselves.

Wright is–more than Seth MacFarlane, more than Judd Apatow, and more than Fred Durst (aharharjoex)–the singular most effective spirit of the 90’s zeitgeist. Spaced was a hot-shot confection which hit the mid-waist of my viewing palette with the combined zing of a Jolly Rancher and the narrative weirdness of an E tab; Shaun of the Dead and Hot Fuzz were like watching your five-year-old mash up a war between his Lego mini-men and a few of the old Kenner Star Wars figures… if you were able to keep up with the action through his own unfettered little stream of consciousness. Wright is a man who plays in his own sandbox with furious passion, and he does things as a visual narrator which defy explanation or analysis, let alone exploitation by other filmmakers.

So, it was no small wonder that I wound up making this, shortly after watching Scott Pilgrim vs. The World: 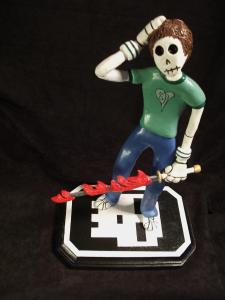 Up until this point, I had never had an urge to base a calaca on anybody else’s work. Everything preceding this point was either an original brain-bubble, or something crafted for a specific recipient; I’m not quite sure what the hell it was about Scott Pilgrim (aside from the obvious) that snapped that trend’s spine, but it wound me up in a new direction, artistically. I still work at a 3:1 ratio between commercially-oriented calveras and original pieces, but I find that the challenge of really doing a character justice–and not just mailing in some quarter-assed “HEY KIDS, YOU KNOW WHAT’S HOT RIGHT NOW? TEAM DIA DE LOS JACOB”–attention-grab is something entirely new.

Plus, it gives me an excuse to flip the script and indulge in my creepy, overbearing fan persona whenever the piece doesn’t sell, and I wind up trying to find ways to get it into the hands of the original creator… Mssrs. Lee O’Malley and Wright can consider themselves served with due notice.