So, with all due objectivity: this has to be just about the worst case of procrastination to hit this workspace since 2011. It’s one thing to let your bloggery go untended due to real-life issues or a lack of overall productivity, but–unfortunately–I’ve got absolutely nothing in the way of such excuses. I’ve been churning out commissions on a steady basis since August, I enjoyed an absolutely amazing trip to Phoenix, (where I had the pleasure of talking too-brief shop about Hispanic heritage arts with the one and only Aztec Smurf), and–perhaps most importantly, considering the state of the calendar–I was again invited to take part in the Folk Tree’s annual observations of dia de los muertos.

Before I get into that, I’ll take a moment and tip back a cup full of grain-alcohol gratitude to Gail Mishkin for her never-ending encouragement, especially in regards to my well-documented issues with structural stability and shipping woes from last year. I’ve worked hard over the course of the last six months to improve my technique and to get a proper grip on the nuances of paper clay: it’s been a game of tipsy hopscotch (“Two hops forward, one flop back!”) at times, but the end results are some of the best work that I’ve turned out. Period.

Without the support of the fine Folk Tree folks–who are still my only real “must-do” outlet for show pieces–I probably would have let the familiar old weeds of self-doubt set me back on the shelf, stemming from frustration over the previous construction issues: so there’s that.

Piece number one is something I’ve actually had planned for quite some time, with the most recent go-around being charted for the FT’s “Angels and Demons” show from earlier this year. As I was still slowly killing myself and anybody within a square-mile radius with the judicious use of polymer clay at the time–and making little progress, in terms of getting it to set properly–I missed a chance to get onboard with that exhibition, and instead slated Ol’ Scratch for a future opportunity:

Latin culture has some of the finest depictions of El Satanico outside of the Middle Ages, and this piece draws its inspiration from a number of them: a sugar skull-style facial motif, cross-cultured with a touch of “El Pachuco” from Luis Valdez’s Zoot Suit. 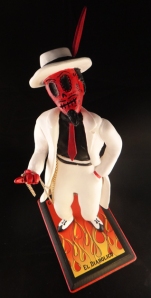 I briefly toyed with giving this fella a loteria number of “666,” but–as we’re still working our way through the first 25 “cards”–I figured I’d do the right thing and stick with some loose chronology. As of 10/30, this piece has sold, which is great: nothing stokes the coals of latent creativity like having one of your calaveras find a good home.
More to come!